We're Getting Mutants in the MCU - The Loop

While on an assassination mission Aeon tries to uncover the identity of a person who might be following her.

In this episode, Aeon is on an assassination mission. She infiltrates her target’s home via a maintenance ladder. On her entry she falls from the ladder, and notices she is spied on by a security camera. While walking down a hallway she notices a room where the security camera recorder is being kept, and enters. She goes to destroy the tape but at the last minute decides to review the footage. The picture is faulty because of a loose video jack shorting against an air vent. Aeon goes to fix the connection but spills coffee on her gloved arm. Unnoticed by the departing Aeon, footage of another intruder previously entering the building plays on the monitor. While washing her arm, Aeon accidentally sprays water on herself in the bathroom’s shower and spoils her signature hairstyle. Aeon then hears gunshots, and evacuates the area to find her target killed. She rushes out of the bedroom, but is then also shot by the assassin. While Aeon lies on the floor dying, she looks at the exiting figure in the security monitor, but the image is still distorted. Aeon shoots a nearby temperature control knob, disabling the air conditioner. With the air conditioning off, the loose video cable stops shaking, and the security camera picture clears up. Just before she dies, Aeon sees the face of her killer on the monitor, Trevor Goodchild. 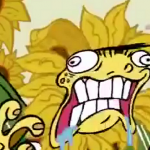